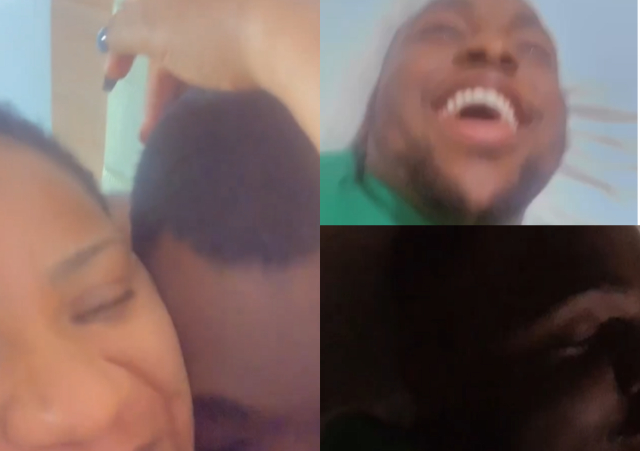 The clip was shared by the lad on his Instagram page which captured the moment the actress gave him the disturbance of his life by refusing to let him be.

Nkechi Blessing who insisted on staying in his room despite having her own room was not welcomed by her boyfriend who asked that she leaves the room but she refused and began to put up some clingy behaviour by holding him so tightly even when he tried to free himself.

Sharing the video, he wrote:

Watch the video below:

In reaction to the clip, fans gushed over the couple’s loved-up moments with many wishing they were in their shoes.

Check out some comments below:

@ohgeeofficial wrote “In few months, she’ll drag this one through the mud and tell us how he is this and that”

@maryrainolere “They might live happily ever after. It wasn’t good for A doesn’t mean it won’t be good for B.”

@its_katchy wrote “So una hold camera do this thing finish, still come calm down rewatched the video and concluded it’s content and posted it for us? 🧐 Eh?? Agadiekwenkas”

@chiamaka.nita wrote “I don’t want to hear his AMU is too small and he doesn’t have pillow in his house”