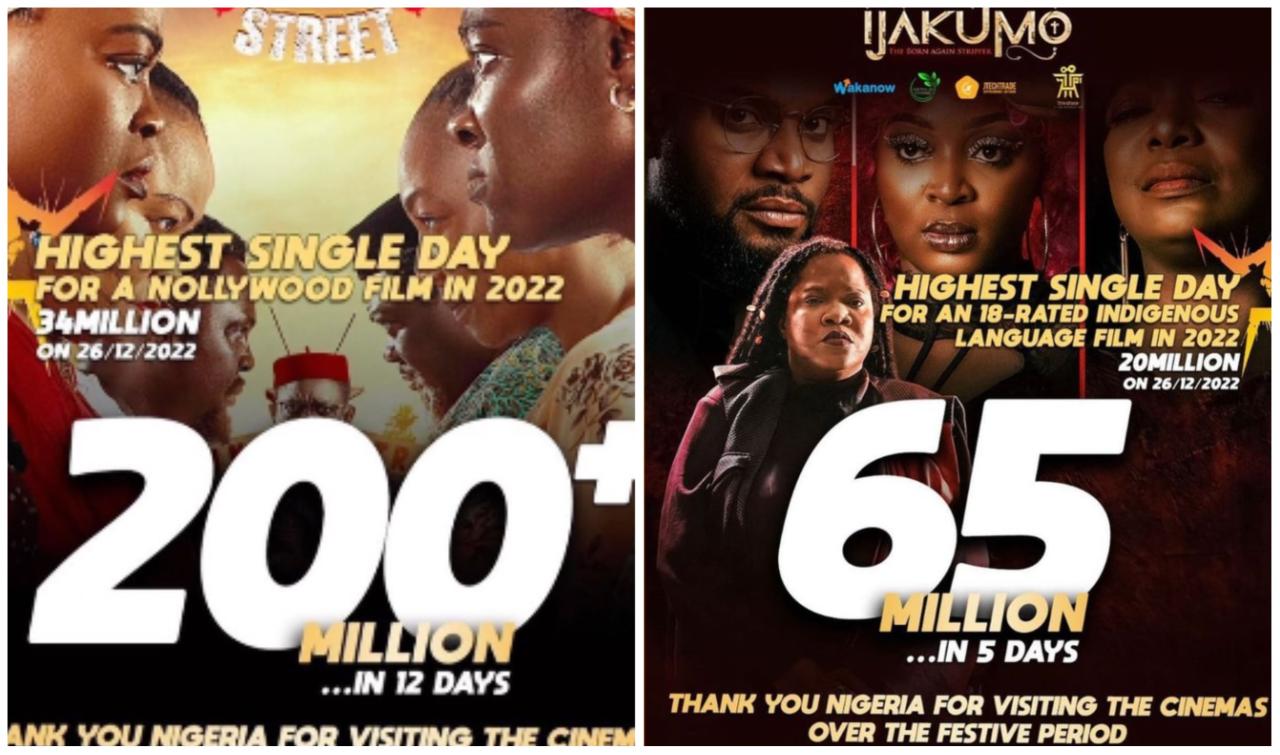 For some days now, Funke Akindele and Toyin Abraham in their competition for the highest-grossing movie of the year, have been bragging about how well their movies, have been doing in the Nigerian cinema box office.

Funke Akindele announced on Wednesday, December 28 that her movie, Battle on Buka street has grossed over N200 million at the Nigeriain box office in 12 days.

It grossed N34 million on Boxing Day to become the biggest single-day earner in Nollywood in 2022.

“Anybody that wants to compete with this type of person will just injure herself, the grace Funke Akindele carries is too much. She is always going to go before you, you follow” one Christian reacted

“Congrats dear Anty Funke with a beautiful heart don’t min toyin Abraham always fighting the unknown and throwing shade I had to tell her my mind yesterday saying real people with real reviews then I asleep her who come Dey post fake reviews and fake people and she should stop fighting the unknown that the sky is big enough for everyone she block me.God bless you your movie will be top most Nigerian movie and so many award awaits all the cast and crew” another fan reacted.

Not to be intimidated by the feat, Toyin Abraham who released Ijakumo on December 23, on the same date also announced that her movie hit N 31million in one day and N65 million in just 5 days.

“Highest single day for an 18-rated indigenous language film in 2022 N20million on 26/12/2022…..For a movie rated 18 in a festive period. I work so hard joor. Thank you so much Nigerians thanks Toyintitans” Toyin announced with pride.

“upon all their manipulating for people not to watch and refused to sell tickets for people at filmhouse surelere, here we are, God is always on the throne , weldone toyin more blessings loke like, lagbara oloun..” One Ariyike reacted

“We Are About To Shatter Every Record Ever Set, Aaaaahhhhh This Is About To Be The Black Panther Of Nigerian Film, Congratulations World Best @toyin_abraham Yesterday When I Was At The Cinema In Lekki Some Parents Where Begging To Carry Their Children With Them Into The Cinema But Film House Said No Because It’s Rated 18 They Begged And Yet No Entry Imagine Ijakumo Not Having The Population Of Children Fans And Yet Ijakumo Is Still Making Waves Like No Other, Nobody have ever done it before this is huge…..World Record Loading.” One Mr Nolly reacted.

Now taking a step ahead of Toyin Abraham, Nollywood actress Funke Akindele has decided to premiere her new movie Battle on Buka Street in the United State of America and in the United Kingdom.

According to her, the movie will screen in the US from Thursday, December 29 to Thursday, January 5, 2023.
She captioned her post: “USA!!!! We are here!!! Battle on Buka Street here!! Grab your tickets fast!!! In a few hours, we take over USA! Battle on Buka Street releases on the 30th of December 2022, exclusively at selected @regalmovies Theatres with Advanced Screening on the 29th.”

She also announced the movie will premiere in the UK from December 29th to January 5th, 2023. 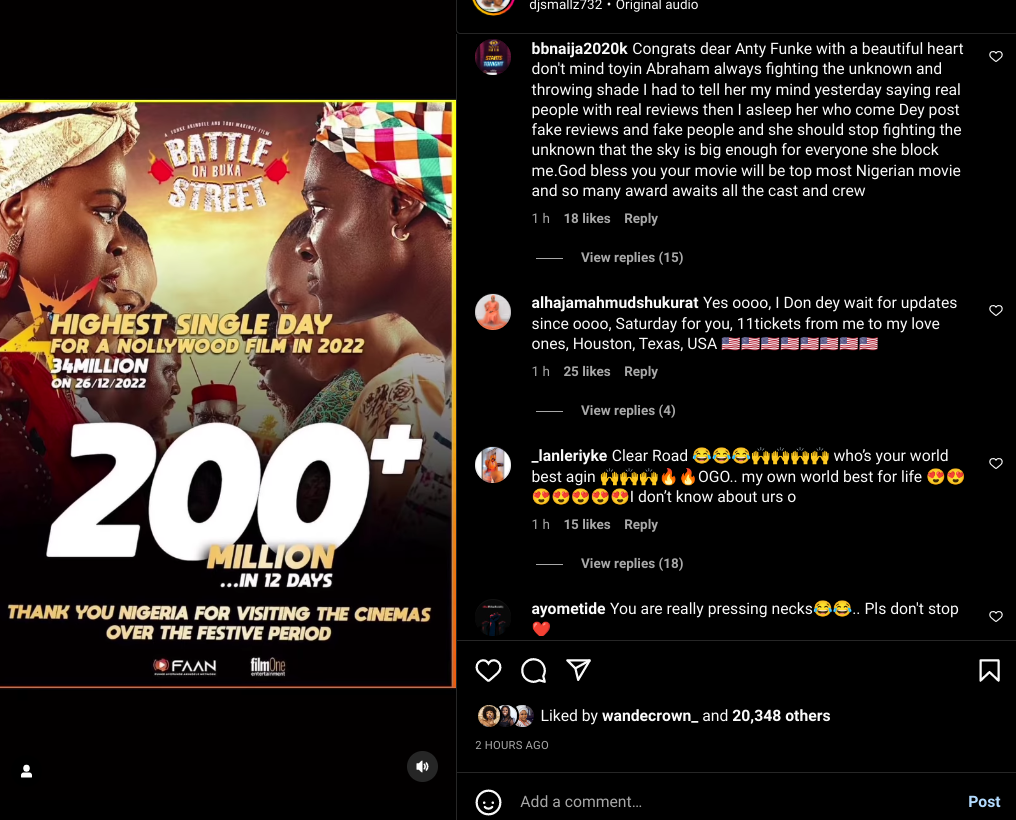 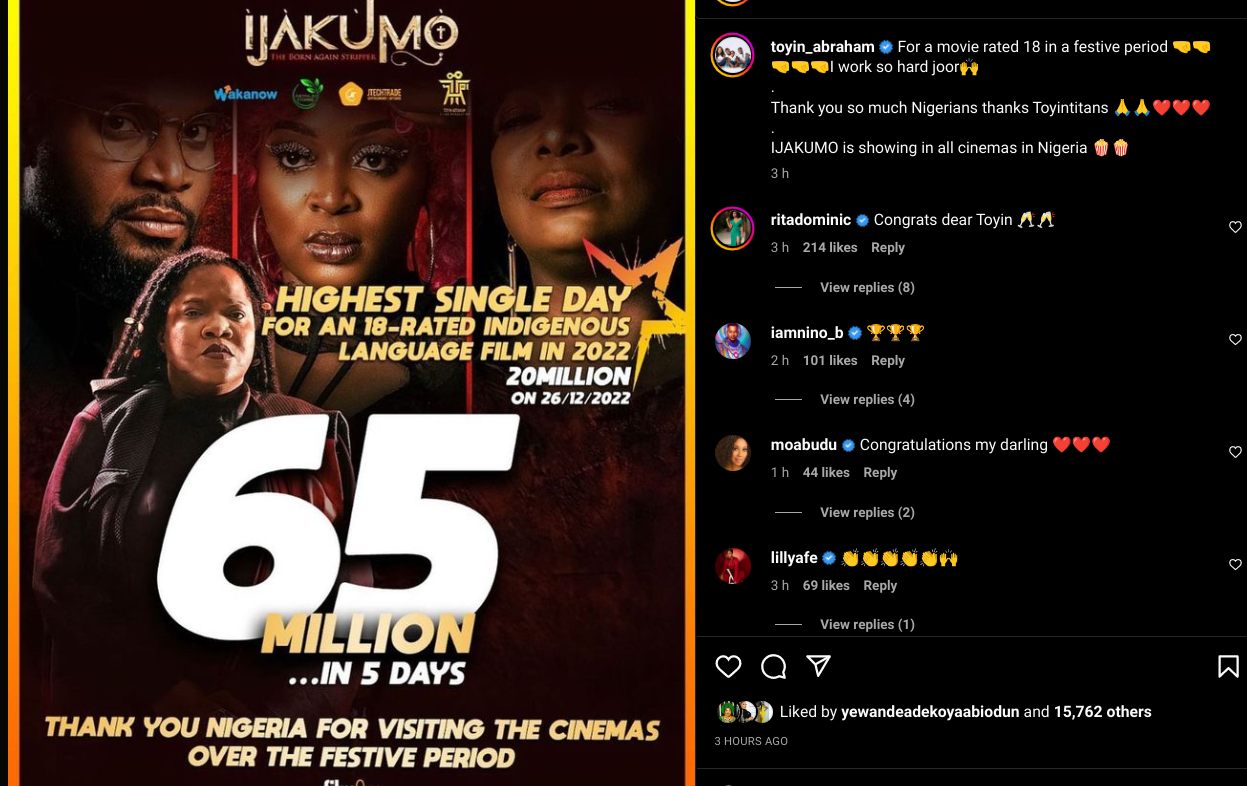 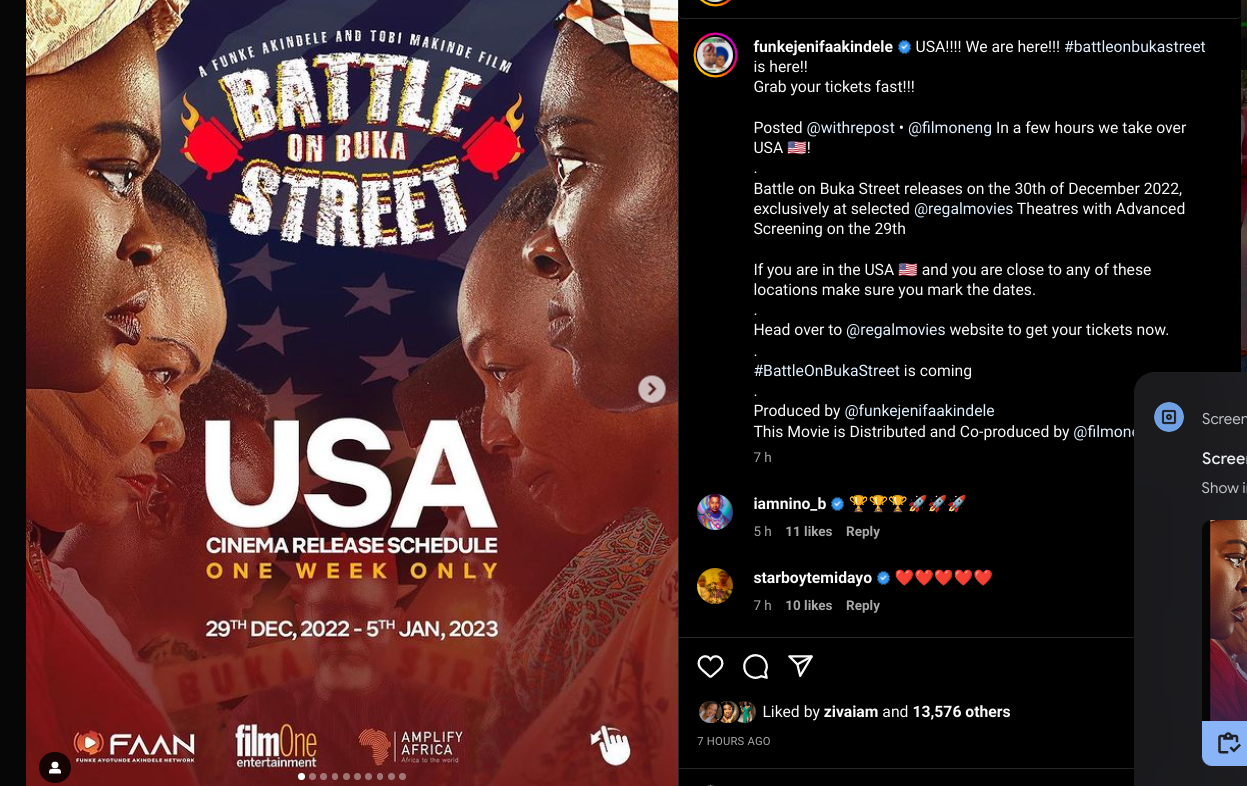 VIDEO: Funke Akindele surprises a plantain chips seller on her way from a movie set