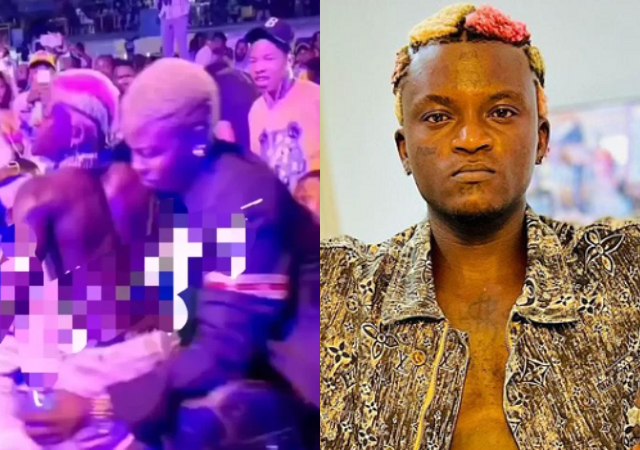 Controversial singer, Portable, has stirred hilarious reactions after falling on stage alongside his manager.

Portable had gotten so heated while performing and his manager rushed to the stage trying her possible best to calm him down.

While they were at it, Portable and his manager both fell on the stage with the singer still babbling uncontrollably.

@harrydvirus said : “I have said it before and I’ll say it again. There’s supposed to be a word as Psychbrity. Cuz I can’t see the difference between burna boy’s character and that of portable. The only distinct difference is one is dressed and work cool why the other is in terminal stages.”

DJ OP Dot – ‘Best Of Portable Mix 2022’ Mp3 Download DJ OP Dot comes through with “Best Of Portable” mixtape. RECOMMENDED FOR YOU NaijaChoice Reformed: The Server Crash | Data Loss and Everything you should know […]

Portable ft. Barry Jhay – All Eyes On Me

Portable ft. Barry Jhay – All Eyes On Me Mp3 Audio Download Portable teams up with Barry Jhay to deliver “All Eyes On Me”. RECOMMENDED FOR YOU NaijaChoice Reformed: The Server Crash | Data Loss […]