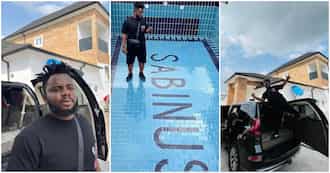 Skit maker, Chukwuemeka Emmanuel Ejekwu, a.k.a Sabinus gets lashed by some social media users for featuring Bola Ahmed Tinubu’s mimicker at his show in Port Harcourt all in a bid to serve humour.

The content creator took to his Instagram page a few hours ago to share the highlight of the event which was a snippet of a man mimicking the APC presidential candidate in all aspects; his blunders, gestures, and so on.

Sabinus on his part was also spotted on stage putting out some funny moves as the audience laughed so hard.

Sharing the snippet, he wrote:
“YOU NEED TO WATCH THE FULL VIDEO 😂😂😂 IF YOU MISSED MY CONCERT ON 18TH DECEMBER!!!! TAP THE LINK ON MY BIO”

While some found the exhibition funny, others faulted the comedian over such a joke as they felt it was unnecessary and depicted pure mockery.

One l.bari_ wrote: “The show is funny but in all honesty it is wrong”

source_gold wrote: “This is a very expensive joke and quite frankly not funny”

“I am working for Asiwaju, Asiwaju builds talent” – Actress Bimbo Akintola declares her support for Tinubu