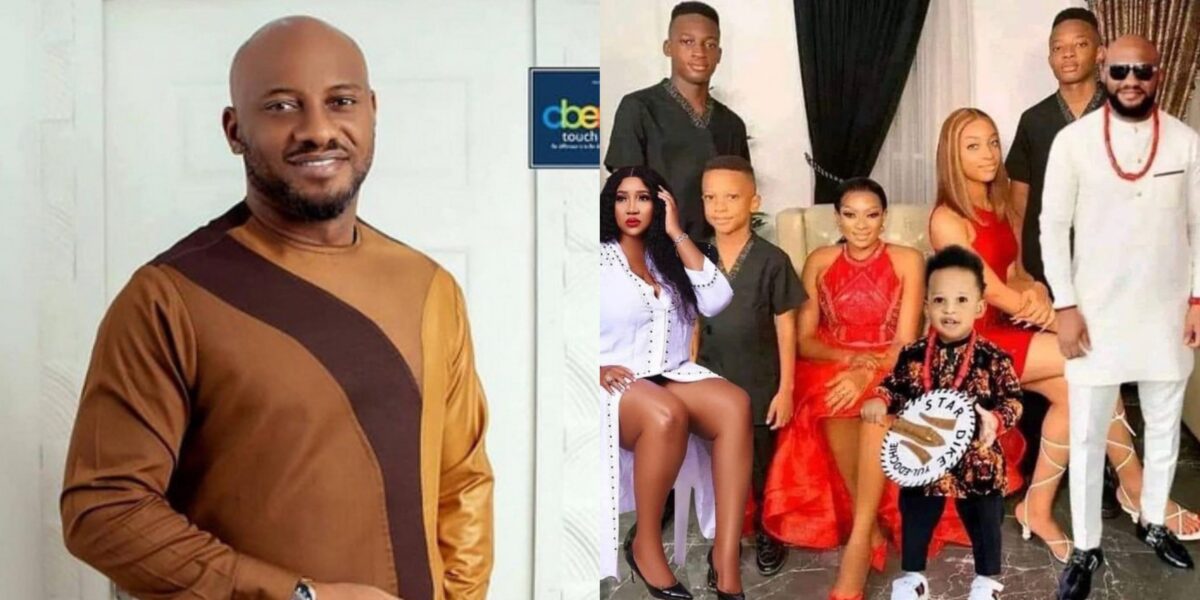 Nigerians are not taking it easy with Nollywood actor, Yul Edochie after he endorsed a photoshopped image of his family.

Yul sent a message to his first wife, May Edochie after his colleague, Serah Martins photoshopped Yul, his second wife, Judy Austin and their son into a family photo released by May.

May, the mother of four had marked her first Christmas without her husband, following her strong stance against polygamy.

Reacting to the photoshopped family photo, Yul Edochie told his wife that they all ought to live in harmony. Fans however noted that he has constantly acting like an unstable weather. One minute apology and the next minute acting contrary.

One Tufab wrote: I’m now convinced this man isn’t in his right state of mind. He’s actually going through a lot. Una no go see am. Because of pride as a man. But he’s hurting & might even be under a spell. Cause all these isn’t normal. 1 min, Apology, and next minute, unapologetic.

One Seun wrote: Sometimes don’t mistake Deep baritone voice for maturity/sense but at this point I think he has jst been locked inside another new fresh schnapp bottle

One Topman wrote: Like play like play. Family is beginning to be laughed at. Any man that has a deep thinking will never ever marry a second wife. Many people online just wants your family gist for laughs. Its a pity.

One Seaman wrote : I think we need to step back a little coz he might be under a spell coz what’s this

One Jisola wrote: Yul needs some sort of spiritual intervention at this point! This is no longer normal Stop insulting your wife dude.

One Irene wrote: You’re harassing that woman at least let her heal

Sheila wrote: I think someone needs to help this man. It’s not ordinary again

Ego wrote: Make we report that Sarah account! As she no d respect people’s privacy. This is wat yul has reduced he’s wife to

Nonye Okoye wrote: in I feel so sorry for May. How can a Yul be so disrespectful, God. Chasing clout with all of this. Go to your mistress and leave this lady alone for the sake of her mental health.

Gloria wrote: No she will not zukwanike!!! When you did skin to skin with Judy you didn’t think of the hurt you will cause her,the pains and above all BETRAYAL-cheating till a baby comes out of it!

Jeff Agu wrote: Polygamy in this generation is not the best decision to take, it will affect the kids on the long run. Let’s say Yul made a mistake but he is handling this like a baby.

Seun wrote: This is really a “Yul-tide season”

Pcode wrote: May, unfortunately you married a narcissist. At this point, he is taunting you and making light of something so hurtful. If I was you, it’s time to completely ignore him and walk away for good. There’s nothing to salvage. @judyaustin1 is also going to experience the same or probably worse fate with @yuledochie. Men like him think of no one but themselves.