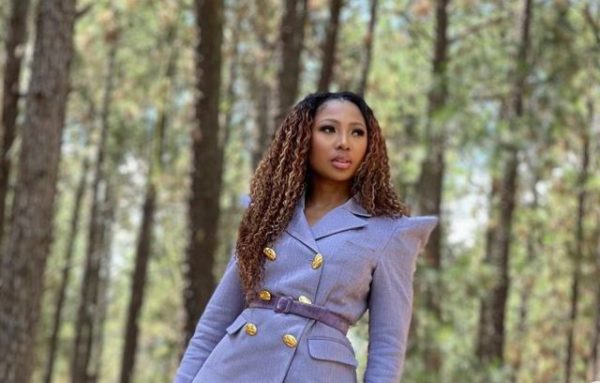 Enhle Mbali wants CNN to conduct an interview with her and her estranged husband, Black Coffee.

Following the announcement of their divorce three years ago, the two have been making headlines over several hideous issues.

Just when we thought they’d settled and media houses are finally getting a break, Black Coffee decided to spill the beans by calling the actress a liar.

The event was followed by the news of Enhle’s affair with a married man named Justice; the affair was confirmed by the wife of the married man.

An old video of Mbali mocking the DJ’s hand resurfaced on social media and this made her lose lots of supporters who defended her abuse allegations against Black Coffee over the years.

The Grammy-award-winning star further announced his willingness to spill all that happened between them on Mac G’s Podcast and Chill.

Enhle responded to all of these on her Instagram stories, by saying she desires an interview with CNN – a bigger platform with an audience across the globe.

“This guy is too much; I want an interview both of us one room CNN! The email I just read! Now planting stuff!! It’s getting increasingly dangerous!!” 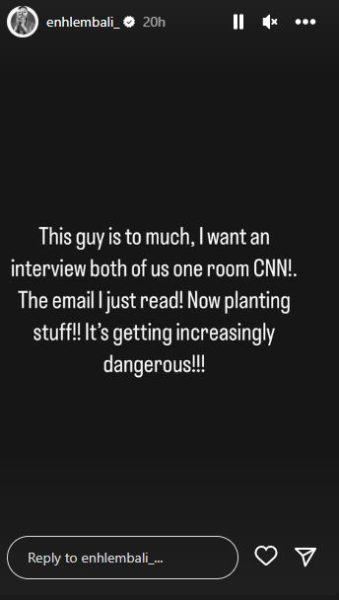 She further urged the DJ to stay off her and the kids till the divorce is finalised as she needs to protect their kids’ wellbeing.

“This has all been so unnecessary and a bore. I will continue with my normal day (if there is any longer such a thing for me). If you want everything to be spoken of, let’s do it, be brave enough to come at me straight. Embarrassment has happened already. A Travesty if you ask me. Lastly, the most important thing for me is my children, their well-being, my career, and myself. Live I’ve been saying from the beginning of this disgusting low vibrational mess. Give me and my children some space please as we complete this polygon of a dilemma,” she added. 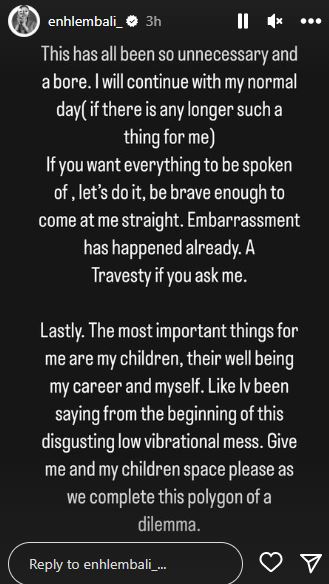